It’s taken a surprisingly long time but the next season of Top Boy is scheduled to begin filming in Spring 2020.  After an incredible return to television, it should come at no surprise that we’ll be seeing more of Top Boy in the near future.

Top Boy is a Netflix Original crime-drama series created and written by Ronan Bennett. The series was formerly a smash hit on British television network Channel 4. After its cancellation, there were many who thought Top Boy would never make a return to the small screen. It’s thanks to Drake that the series has been revived, the Canadian rapper was a huge fan of the series and had even offered to fund the entire production of season 3. In the end, Netflix would pick up the series with Drake staying on as an executive producer. Ashley Walters returned to reprise his role as Dushane, and creator Ronan Bennett returned to write the latest season.

Before Top Boy had even arrived on Netflix it was reported that two-seasons had been planned for its revival. It’s taken a while for any news on the production of the next season, but Netflix has now confirmed that that Top Boy will begin filming in Spring 2020.

Despite arriving in September 2019, it took Netflix longer than expected to renew Top Boy for a second season. It was originally reported that Top Boy was to receive two seasons, but it has only just been confirmed by Netflix.

When will the second season be available to stream on Netflix?

This entirely depends on the length of filming, and everything that goes into the series post-production. A 2021 release date would have been realistic but according to executive producer Drake, we’ll see Top Boy return later this year. 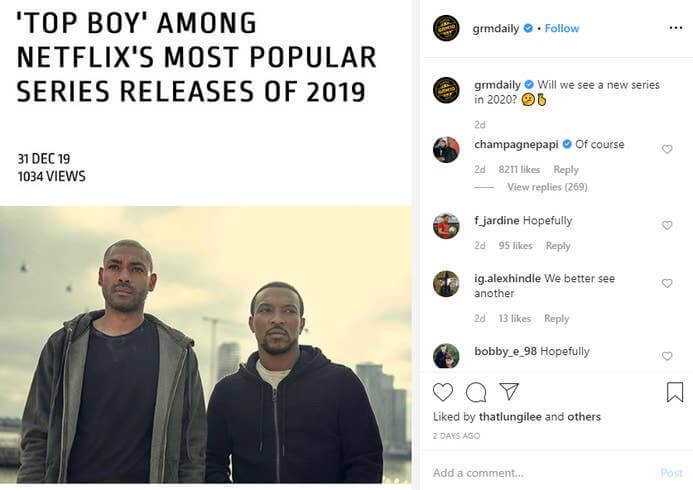 How many episodes can we expect from the next season?

The most recent season of Top Boy arrived with ten episodes, and we’re fully expecting the next season to follow suit.

We already have confirmation that the first episode in the next season is named “Killing No Murder”.

Which cast members will be returning?

Fans will be relieved to learn that the top players will be returning to the cast of Top Boy. This has been confirmed by various different social media accounts from Netflix.

Confirmed: Top Boy s2 is happening!! What we can tell you:

Thanks to his Bafta Rising Star win, many eyes will be on actor Michael Ward, who portrays Jamie. 2019 was a fantastic year for Ward who not only starred in a breakout role in Top Boy but was also acknowledged for his acting prowess in Blue Story.

Blue Story was highly controversial in the UK thanks to a mass brawl in Birmingham between 100 people, one of which was wielding a machete. The British crime-drama will debut in theatres in the US later this March.

Are you looking forward to the release of Top Boy season 2? Let us know in the comments below!