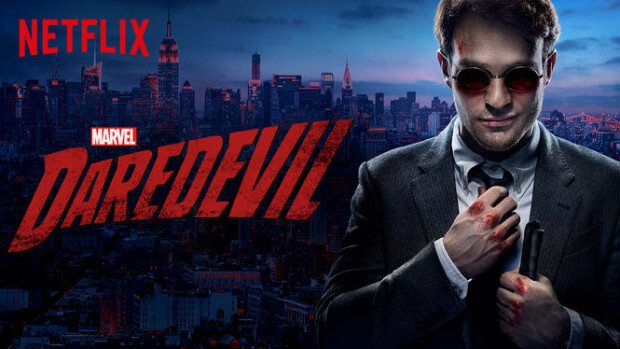 You will not believe just how excited I am this morning. Not only is it my birthday today, and I’m also going away for the weekend with the kids but Marvel’s Daredevil series has just been added to Netflix! I’m a massive comic book fan (particularly the Marvel ones) and I’ve been eagerly awaiting the arrival.

“Marvel’s Daredevil” is the story of Matt Murdock who was blinded as a boy but gained incredible senses. As he grew up he became a lawyer but by night he keeps Hell’s Kitchen, New York, safe as the masked vigilante Daredevil. All 13 episodes (around 11 hours) are available to stream right now. Let us know what you think of it in the comments (but NO spoilers!)

Another recent Netflix exclusive was “Better Call Saul” where episodes were added each week after they aired in America. The whole of season 1 is now complete and available on Netflix.

Also added this week is the classic 1990 horror flick “Tremors”. Set in a small, American town, a worm-like creature starts sucking it’s human prey underground to eat them. When a local seismologist notices the strange tremors the residents realise they are trapped in their town with no escape.

That’s all for this week – see you soon!