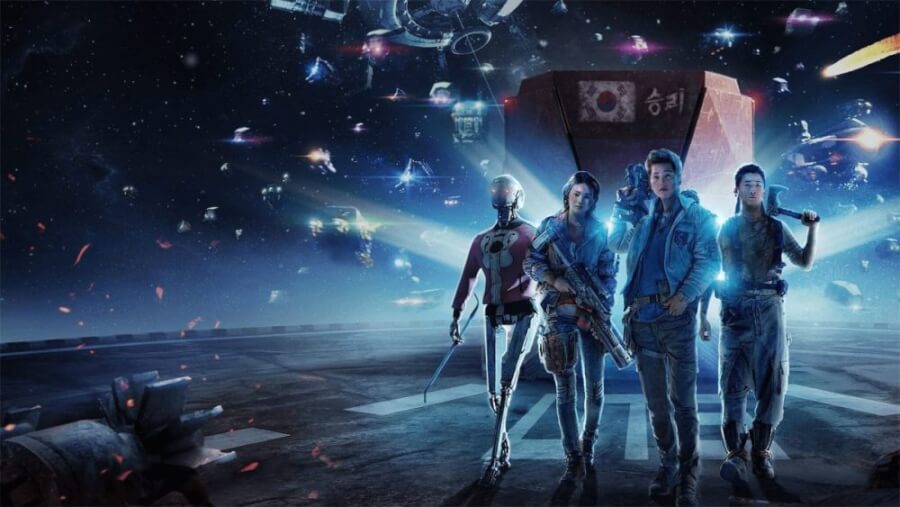 If you recently watched Netflix’s South Korean space blockbuster Space Sweepers, you may find yourself looking for some clarity and answers for what happened at the end of the movie. We’re here to give a rundown of how Space Sweepers ended, and any lingering questions subscribers may be asking themselves.

In the not so distant future,  Earth is on the brink of destruction, and the only form of currency left is the trash that remains. A team of space sweepers close to collapse suddenly find their luck changed when they find a human-like robot. Thinking they’ve hit the big time, it’s not long before word travels across the galaxy, and soon other crews go on the hunt for the space sweepers in hope of stealing the robot and the bounty for themselves.

With the destruction of Earth and the death of Kang Kot Nim/Dorothy imminent, the crew of the Victory lead a suicidal rescue mission to save the Earth and Dorothy.

After successfully escaping the factory with Kot Nim, the UTS forces were hot on the tail of the Victory, but thanks to the heroic efforts of the other space sweeper crews the Victory was able to escape the forces of the UTS until James Sullivan arrived.

Sullivan personally got involved in the fight so he could recapture Kang Kot Nim, to ensure that she would die and couldn’t save the Earth from its imminent destruction. Unbeknownst to Sullivan, the crew of the Victory had engaged in a bait and switch by handing Kang Kot Nim to Pierre and stealing the hydrogen bomb from the factory. Sullivan’s confession on his plans for Earth was recorded and distributed to all of the UTS and Earth inhabitants.

The crew of the Victory is successful in making it past the 5,000 km mark, and sacrifice themselves to save the Earth and Kot Nim by igniting the hydrogen bomb from a safe distance, killing Sullivan in the process.

Their sacrifice wasn’t in vain thanks to the nanobots that were emitted from Kang Kot Nim. The nanobots successfully encased the Victory and kept the ship, and crew, from being harmed by the hydrogen bomb.

In the aftermath of Sullivan’s attempt to destroy the Earth, UTS was forced to make a public apology and pledged to step up its efforts to help the inhabitants of Earth and the wider solar system. The space sweepers were compensated for the part they played in saving the Earth, especially the crew of the Victory.

Thanks to the efforts of Pierre, Captain Jang, and a newly rebuilt and feminine Bods hunted down and successfully retrieved money that was stolen from them.

Finally, after years of trying to track down his daughter, Tae Ho finally had the opportunity to see her again. By using Kang Kot Nim and her nanobots Tae Ho was able to say goodbye to Su No just before she left the Earth’s orbit and become lost to space.

The Crew of the Victory – Copyright. Netflix

The crew of the Victory was as close as ever, with Captain Jang jokingly talking about sending Kang Kot Nim to boarding school. Bods offered a welcome distraction by asking Kang Kot Nim for an opinion on a new and feminine voice.

In the end, we learn that Captain Jang had stopped drinking, Tiger Park had removed all of his intimidating tattoos, Tae Ho bought himself lots of pairs of shoes, and Bods wants to become a sophisticated lady.

In the closing moments, the Earth appears to be on its way to recovering, but the crew of the Victory has decided to stay in space and keep up their reputation as the best space sweepers in the solar system.

Was the Earth saved?

Thanks to Kang Kot Nim and the power of the nanobots the Earth is on track to fully recover. Trees have regrown, and lakes and oceans can be seen on the surface.

What happened to the UTS residential districts?

At the end of the film when Bods is seen reading a book on top of the Victory, it appears that the Earth’s orbit has been cleared of all of the UTS residential districts that contained some of the richest members of humanity.

It’s likely that with the recovery of Earth and the terraforming of Mars that there is no longer a need for UTS to provide residential districts in space for society’s wealthiest occupants.

Had Tae Ho been able to get to his daughter in time, she could have been recovered and saved. But with saving Kang Kot Nim and Earth, the three-year deadline to save his daughter had passed. With Su Ni leaving Earth’s orbit she is now lost to space and ultimately dead.

Why is there still Space Sweepers?

With the sheer amount of debris in space, especially by 2092, there will always be a need for Space Sweeper crews to collect the treasure and junk from all the Earth’s orbit.

Why the crew of the Victory continues to be Space Sweepers is likely for the love of the job, and the exhilaration of being the best crew in the solar system.

What did you think of Space Sweepers? Did you enjoy the South Korean space blockbuster? Let us know in the comments below!