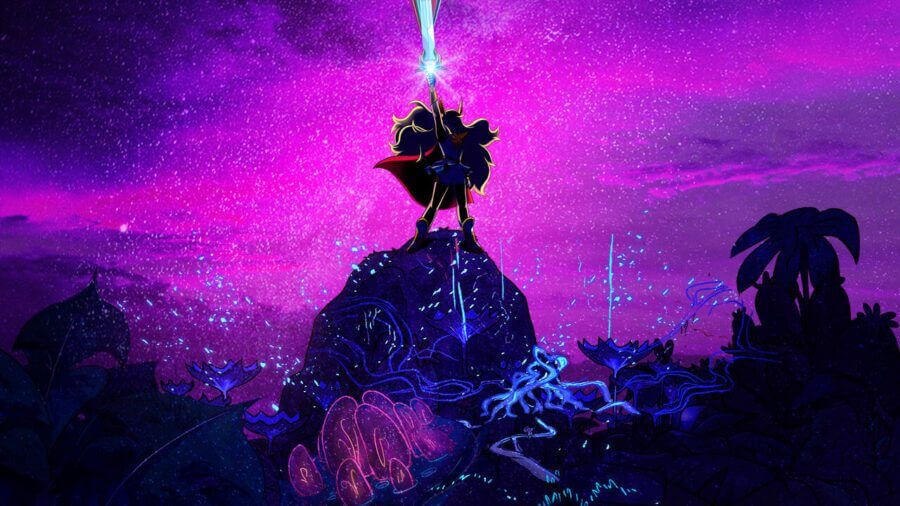 She-Ran and the Princesses of Power – Copyright. Dreamworks Animation Television

She-Ra and the Princesses of Power have fast become one of the most popular Originals on Netflix. With fast-paced releases, fans haven’t had long to wait to get their fill of Etheria. For those that have already binged the fourth season will be looking to season 5. We’re still waiting on news for that but we’re tracking the Netflix renewal status and release date for She-Ra and the Princesses of Power season 5.

She-Ra and the Princesses of Power is a Netflix Original cartoon series, based on the characters of The Master of the Universes. Developed by Noelle Stevenson, She-Ra and the Princesses of Power has become an incredibly popular Original. Upon release, the series received criticism from some fans for its radical change in character design. Ultimately, fans old and new have come to love the new She-Ra.

We aren’t expecting the “pending” status to stay that way for very long. She-Ra and the Princesses of Power have already proven to be one of the most popular cartoon Originals, therefore, we’re fully expecting the series to return for a fifth season.

When I first pitched the show, I approached it as if it had one season, but we now have four arcs of 13 episodes done. I had ideas for the big overall scheme for the show. The first thing I did was create a vision board, pulling inspiration from a variety of sources. I had the incredible luxury of working with a team of great writers. It was great to brainstorm and come up with this rich world in great detail. Get a lot of ideas and throw everything at the wall and see what sticks.

We’re four seasons down and 39 episodes have been produced, meaning that She-Ra and the Princesses of Power are likely to conclude with season 5.

Will the final season be split into two?

To spread out the release of the final 13 episodes there’s every chance that season 5 could be split and only receive six or seven episodes. We previously saw this with season 2 and 3, with the former airing seven episodes, while the latter aired six. This matched Noelle Stevenson’s plan to have thirteen episodes per story arc.

What to expect from Season 5?

Be advised there are heavy spoilers for the fourth season!

The future of Etheria

Etheria is no longer safe from Horde Prime’s armada as it was pulled out of Despandos. With Etheria now in the same realm as Eternia, there’s potential for a crossover with the characters from The Masters of the Universe.

After using her sword to stop Light Hope, Adora’s weapon shattered, and her powers disappeared along with it. She has the shards of the blade so she could potentially reforge the weapon. Adora has used the sword the entire series as a conduit to transform into She-Ra, we could a potential Thor: Ragnarok story beat in which Adora will come to the realization the power has always been inside her all along, she just simply had to grasp it.

Until then, Adora has no means to transform, therefore, she’ll have to rely upon her own strength and smarts to save her friends and the universe. 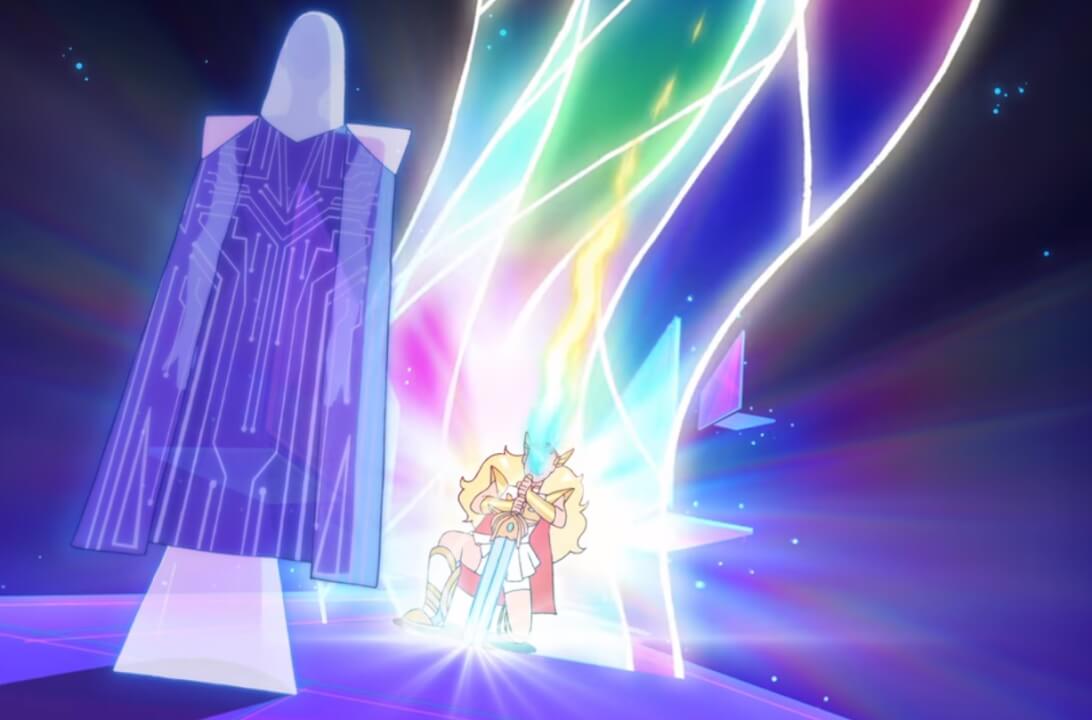 Horde Prime was moments away from killing Glimmer and potentially destroying Etheria. If it wasn’t for Catra, Glimmer, and Etheria may have been annihilated.

Making Horde Prime aware of the power Etheria as a superweapon, he has decided to spare Glimmer and the planet for now. Catra and Glimmer will have to put aside their differences if they are to work together to take down Horde Prime from the inside.

As for Hordak, the clone has been sent to be “reconditioned” by Horde Prime. If we are to assume Hordak receives a personality wipe, Hordak may just become a lap dop for his brother. There may be redemption waiting for Hordak, but it’s going to be a big task to pull the evil clone to the light. 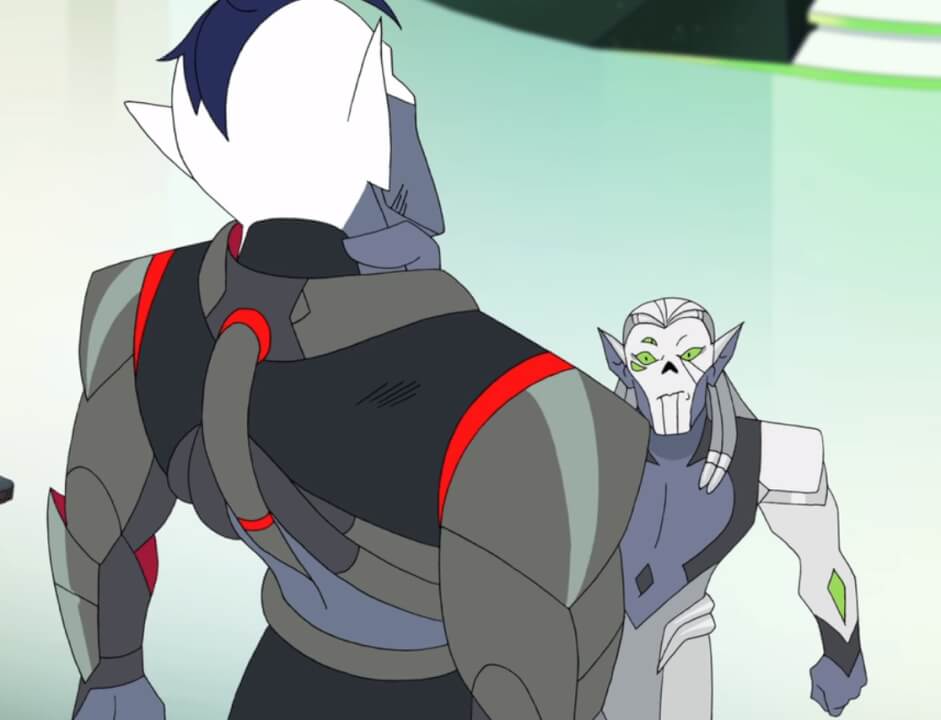 Will She-Ra crossover with He-Man?

During a discussion at New York Comic-Con, Noelle Stevenson had the following to say about a potential crossover:

No, I would love to do a Christmas special crossover. I’m sure it’s going to be in a really totally dope powerhouse style and ours is going to be in our more candy-colored style. I would love to just bring those two styles together and have them celebrate Christmas and teach the power of love while they open presents. But as of yet, they have not contacted me for that.

Sadly, it looks like a crossover with He-Man may not open. This isn’t surprising as Kevin Smith is still working on the reboot of the series. Not to mention that the animation of the new He-Man series, Masters of the Universe: Revelation, will be vastly different as it’s an anime.

Did subscribers enjoy the fourth season of She-Ra and the Princesses of Power?

Each subsequent season appears to get better and better, and the sentiment is shared amongst subscribers:

She-Ra and the Princesses of Power continues to be a gem of show that keeps on surprising me with how well written it is and how compelling its characters are. Season 4 was fantastic.

She-ra and the Princesses of power Season 4 was amazing!!! Now I can’t wait for the next season! Scorpia had her own episode!!! Aaaaaaahhhhh!!#sheraseason4

So I just finished watching she-ra and the princesses of power season 4, I can easily say best season yet, no spoilers here but, THAT ENDING AHHH

She-Ra and the Princesses of Power season 5 release date

The release of the fifth season will be dictated by the episode count. If Netflix intends to release the remaining thirteen episodes in one season, then we may not see the season 5 arrive until Summer 2020.

If the final story arc is split into two more seasons, then we could see the fifth season arrive as early as April 2020. Our speculation is based upon the releases of previous seasons when season 2 arrived in April 2019, and the third season arrived in August 2019.

We can expect to learn more soon!

Are you looking forward to the fifth season of She-Ra and the Princesses of Power? Let us know in the comments below!