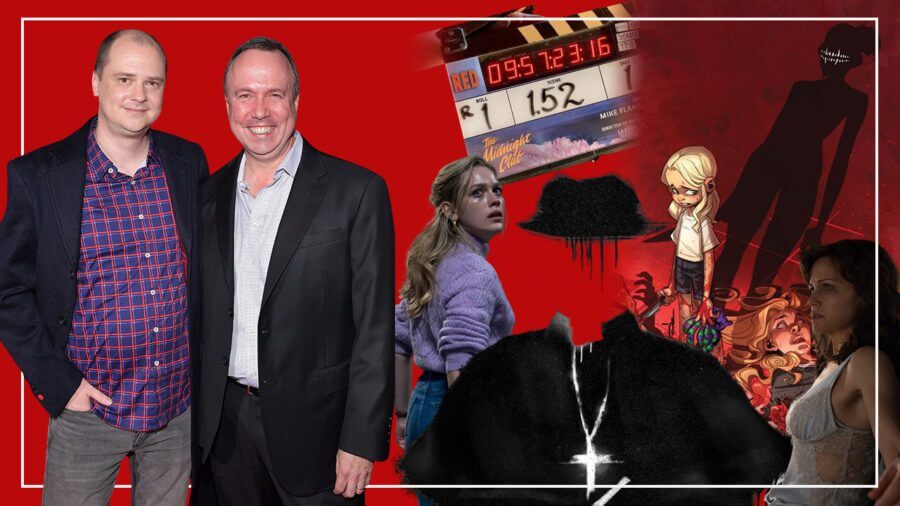 Mike Flanagan and Trevor Macy signed their overall deal with Netflix back in February 2019 and have a host of content both available on Netflix and coming soon. Here’s a comprehensive guide to their output on Netflix.

As we mentioned, Mike Flanagan and Trevor Macy via the production company, Intrepid Pictures are working with Netflix under an overall output deal. Producers such as Ryan Murphy, David Benioff and D.B. Weiss, and Shonda Rhimes all have similar output deals.

Both are prolific creators mostly in the horror space.

In addition to all of the titles below, some older movies that aren’t Netflix Originals are also available on Netflix around the world including Hush, Before I Wake, and Oculus.

Let’s now take a look at what we can expect next from Mike Flanagan and Trevor Macy on Netflix.

Every Mike Flanagan and Trevor Macy Movie & Series on Netflix

The next big series to come from Mike Flanagan is Midnight Mass (which is not an adaptation of F. Paul Wilson’s novel).

The series focuses on a series of events following a priest’s arrival to a small isolated community with all kinds of miraculous and rather scary events taking place.

You can find more about Midnight Mass including more of the big stars that are attached to the horror series and production updates in our preview.

The Midnight Club is the project set to come after Midnight Mass and is an adaptation of the book by Christopher Pike.

The series takes place at th Rotterdam Home and follows terminally ill teens who sit together and share their scary stories while also making a pact.

Filming got started in April 2021 with it expected to wrap up in September 2021.

Netflix currently has an output deal with Boom Studios! and they’ll be teaming up with Intrepid Pictures to adapt the dark comic into a series.

The comic book is often compared to The Walking Dead in scope and was extended into an ongoing series after initially being conceived as a limited series title.

One other project we’d just like to touch on is a movie that greenlit outside of Netflix back in August 2020 with Intrepid Pictures attached to produce the comic book American Reaper. This would be financed and released by Amblin (Stephen Spielberg’s outfit). Could this jump over to Netflix given Amblin’s new deal with the streamer? Time will tell.

Elsewhere, Intrepid Pictures is set to bring The Season of Passage to Universal Pictures.

And finally, those heading to Universal Studios can expect to see The Haunting of Hill House attraction on their trip between September and October 2021.

What’s your most anticipated Mike Flanagan project? Let us know in the comments.