Pacific Rim: The Black is a Netflix Original anime series created by Greg Johnson and Craig Kyle, and based on the live-action Pacific Rim films. Polygon Pictures is the animation studio behind the series, which Netflix subscribers should be more than familiar with. Polygon is responsible for the production of the Godzilla anime trilogy, Knights of Sidonia, and Drifting Dragons.

Fans of the anime will be delighted to learn that Pacific Rim: The Black has already been renewed for a second season. When the announcement was first made that an anime adaptation of Pacific Rim was in the works that two seasons were going to be produced.

At the time of writing Pacific Rim: The Black has only been available to stream on Netflix for a little under a week, but has already made an impact.

In the limited time, it has been available to stream, Pacific Rim: The Black has made it into the top 10 lists of 26 different regions, including the USA. If the series hadn’t been renewed already, its performance definitely warrants a second season. 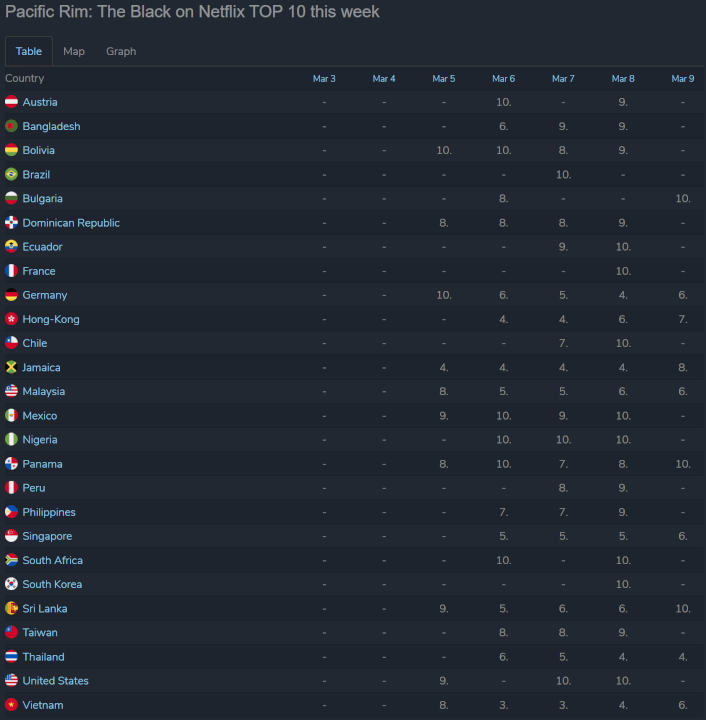 What to expect from Pacific Rim: The Black season two

Will Taylor and Hayley reunite with their parents?

After stumbling upon Hunter, the Jaeger that was piloted by their parents, Tayler and Hayley now have hope they can find them soon. No bodies were found in the wreckage, and instead, a video message was left behind with their parents. They were forced to flee as their Nuke was jammed, and there was no other way to destroy the Kaiju they were fighting.

With the only clue to their whereabouts being Sydney, Taylor and Hayley will continue to make their way to the coastal city hoping to find their parents.

What is the mysterious Boy?

Boy had been an enigma to Taylor and Hayley, and throughout the first season, he was shown to be extremely special. Able to take gunshots without injury, and able to communicate with other Kaiju some of the mystery was peeled away when it was revealed that Boy is in fact a Kaiju.

Transforming into one of the creatures while defending Hayley, the implication of this is that the Precursors can create Kaiju to look like humans and hide them in plain sight.

Boy is a valuable friend to Taylor and Hayley, but also a dangerous one. Can Boy think for himself? Or would he have to follow the orders of a Precursor if given any? For now, at the very least, he has shown to act on his own free will.

The sisters have plans for Boy?

Shane had alluded to the sisters earlier in the season, but we finally received our first glimpse of them at the end of season one.

The mysterious cult has a connection to the Kaiju, and appears to worship the alien creatures. Their sights are set on Boy, calling him the “Kaiju Messiah.” It’s likely their intentions are to kidnap him and supplant him as the leader of their cult. With bigger ambitions being using Boy to wipe out the rest of humanity.

Will Mei have her revenge on Shane?

The threat of Shane still looms and Mei will want to have her revenge on him. Learning that Shane had taken her away from her parents as a child and altered her memories in the process to make her believe he was her savior was devasting. Along with the death of Joel, Mei has every reason to take revenge upon him.

We don’t currently know where Shane is, but one thing is clear is that Mei will one day meet him again, and take revenge for all the hardship he has caused her.

When is the Pacific Rim: The Black season two Netflix release date?

Despite already being renewed, Netflix hasn’t announced the release date for the anime’s second season. Due to the fact that the series was originally scheduled for release in 2020, it wouldn’t be surprising if the second season is already ready to be released.

We’re speculating that the second half of Pacific Rim: The Black will be coming to Netflix later this year, most likely in the Fall/Autumn or Winter.

Are you looking forward to the release of Pacific Rim: The Black season two on Netflix? Let us know in the comments below!