‘Paradise PD’ Season 3: Netflix Renewal Status and What to Expect 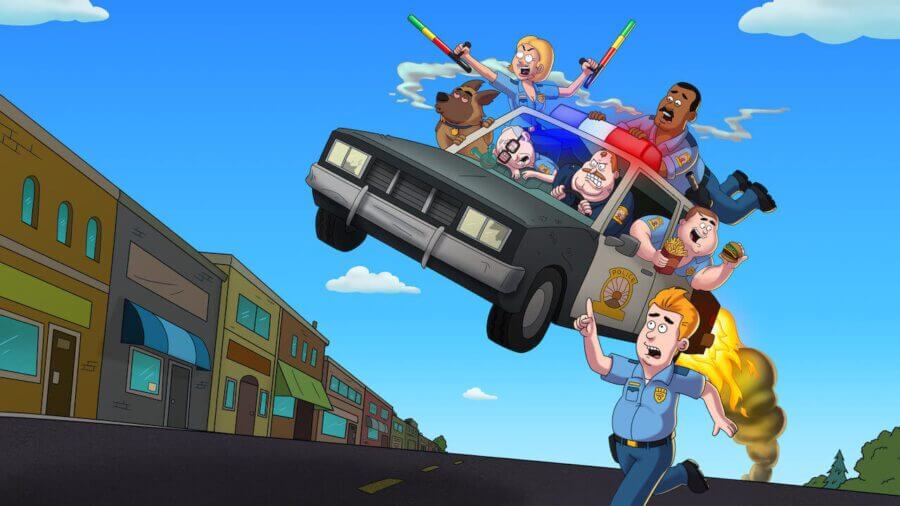 They came, they saw and they kicked a lot of ass, Paradise PD was just as crazy as ever for its second season. After another hilarious and bizarre season of adventures, fans are already demanding to know if Paradise PD will be returning for a third season. Let’s find out.

Paradise PD is a Netflix Original adult animated comedy series created by Waco O’Guin and Roger Black. Produced by Bento Box Entertainment, the studio is well known for its production of Bob’s Burgers and Brickleberry.

The show can be described as “Family Guy on drugs”, thanks to all the crazy and completely random antics and jokes peppered throughout each episode.

Notably, in season two, Paradise PD did have a crossover event with Brickleberry.

The show was unceremoniously renewed a month after the second season dropped onto Netflix.

Waco O’Guin announced he news on April 8th, 2020 although it’s worth noting the main Netflix accounts did not promote it and to our knowledge, no press releases were sent out either.

One additional reason the show may have been renewed so quickly is because of COVID-19 affecting production on live-action productions. This has many networks heavily lean in on their animated slates and Netflix is no exception.

What to expect from season three of Paradise PD

In the climactic finale, the Paradise PD took down the Kingpin, and Dobby heroically sacrificed himself by crashing Chief Crawford’s chopper into the nuke.

Unfortunately for our heroes, the Kingpin had a second Nuke, which successfully detonated in Paradise. The nuclear explosion cooked the Kingpin’s giant deep-dish pizza, and killed the townspeople of Paradise in the process?

In the final seconds of the season, it was teased that this isn’t the end of the Paradise PD and fortunately, we know that to be the case now.

In an interview with Mashable, the team behind the show spoke about the production process with Waco stating that “We have a table read and two screenings for each episode and a punch up based on the reaction from each one.”

There was a funny exchange regarding the story of season 3 (albeit unfruitful in the grand scheme of things. The interviewer asked “Legally, can you please tell us anything about Paradise PD Season 3? Even a little hint will do.”

To which Waco replied:

When asked if there was ever going to be a movie on the cards (inside or outside the Paradise PD universe), Waco stated: “We love TV and we plan to stick to it. If we ever produced a movie it would probably be for our friends at Netflix and likely animated.”

How did fans react to the second season of Paradise PD?

Just binged all of Season 2 of #ParadisePD today.
Things I took away from it:
-Big Ball Energy.
-Brooklyn Nine Nine is fun to rip on.
-Brickleberry was as funny as I remember. Enjoyed the crossover.
-Kevin Sucks Day should be a national holiday.
-Need season 3 now!!!!#Netflix pic.twitter.com/FpzTIcBuuV

The time between the first and second season was just over 17 months.

Netflix doesn’t always have a clear release schedule for some of the Originals, so we’d expect to see Paradise PD arrive in the Summer of 2021.

Would you like to see another season of Paradise PD on Netflix? Let us know in the comments below!