‘The Dark Crystal: Age of Resistance’ Season 2: Netflix Renewal Status & What to Expect 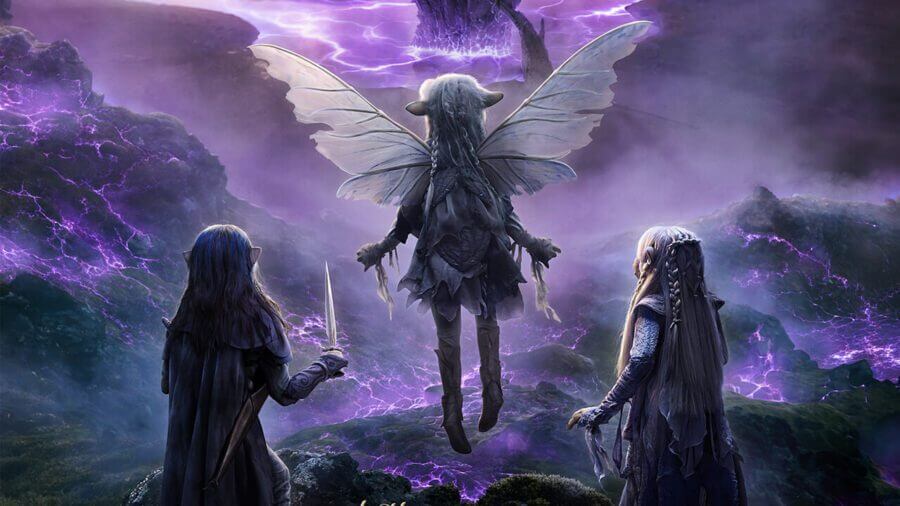 The Dark Crystal: Age of Resistance Season 1 is available to stream on Netflix

After an excellent first season, The Dark Crystal: Age of Resistance impressed subscribers and critics alike all around the world. As expected fans are now asking when can we expect to see a second season? As we enter 2020, will there be another season and what can we expect? Let’s dive in.

After 37 years since the release of Jim Henson’s The Dark Crystal (set to leave Netflix on January 1st, 2020), the world of Thra has had a glorious return. Expanding on the beautiful world created by The Jim Henson Company, The Dark Crystal: Age of Resistance is one of the most visually captivating Originals to date.

With an all-star cast of voice actors and puppeteers to boot, Netflix really outdid themselves with the series which dropped on Netflix on August 30th, 2019.

Along with the incredible puppeteers and actors, much of the credit to the success of the series can be directed at the co-creators Jeffrey Addiss and Will Matthews. The writing team also did a phenomenal job weaving the narrative, puncturing the hearts of many subscribers. Javier Grillo-Marxuach of Lost and Charmed worked as one of the lead writers on the series, and his influence can certainly be felt. The Dark Crystal: Age of Resistance was in development for an incredible amount of time, and if it wasn’t for their dedication and hard work, the world of Thra may not be what it is today.

It came as a massive surprise to us that The Dark Crystal: Age of Resistance wasn’t a limited series. But by the end of the first season, it’s evident there’s enough story to cover a subsequent season.

Almost six months on (in December 2019), news on a second season have remained quiet. The series co-creator, Jeffrey Addiss, has been on record saying: “We also have a concrete document for season two. So we are ready to go.” and the other co-creator, Will Matthews, saying: “If we are lucky enough to get more seasons then the story will go on and we know where it’s going and it’s maybe more hopeful than you might think.”

Although Netflix has been getting better at releasing viewership data, no data has been released as of yet.

We’re still optimistic that it will get a second season and given most of the cost would’ve been frontloaded for the series with costumes, puppets and sets all now having been built, a second season should be vastly cheaper. However, it will still be an expensive series with 2,500 having worked on the first and likely a similar number going into any second season.

Dark Crystal: The Age of Resistance — By The Numbers

More than 170 puppets were used
Over 70 different species were created
83 puppeteers & 59 voice artists bring them to life
And, in total, more than 2,500 people worked on the 10 episodes that are now streaming! pic.twitter.com/b2joOae1xs

What can we expect from the next season?

It will be the beginning of the end for the Gelflings.

Despite winning the battle of Stone in Wood, the Gelflings have not won the war against the Skesis.

By the seasons’ end, the Scientist was able to create a weapon that would turn the tide of the war in the Skesis favor. His monstrous creation was the Garthim, powered by the dark crystal, the Garthim are the result of the corpses of Arathim and the Gruneks pieced together. In the lore of The Dark Crystal, the creation of the Garthim lead to an event known as “The Garthim War.”

The Garthim will be the tool the Skesis will wield to win the war against the Gelflings and to steal their essence. 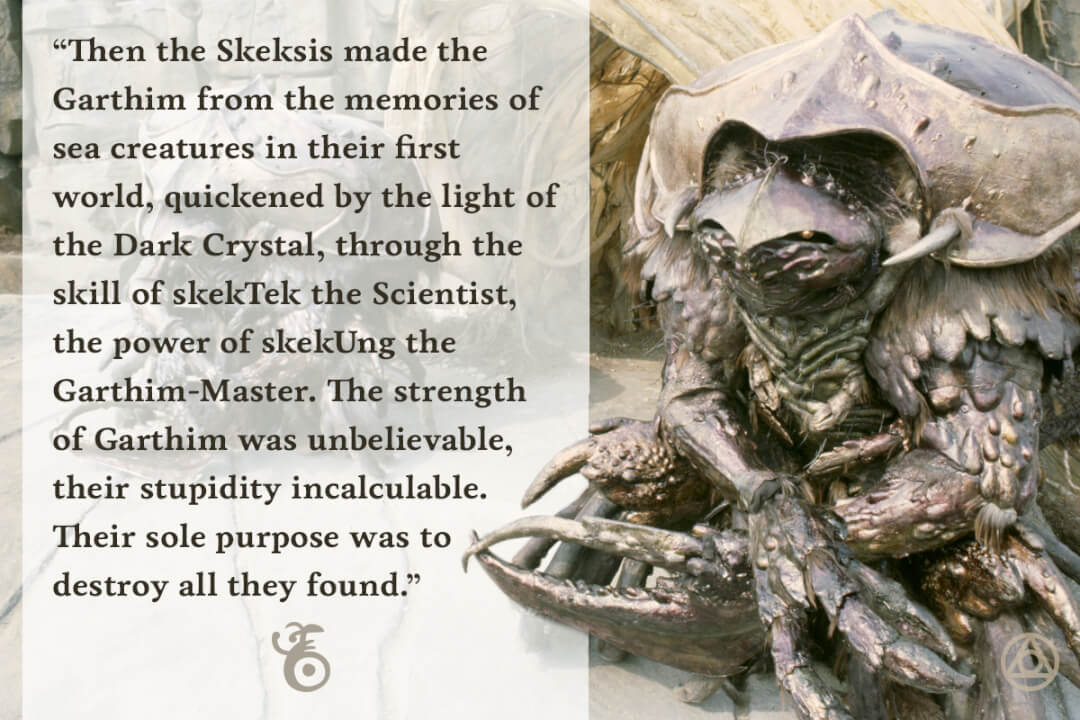 What will happen to Deet?

One of the kindest and most gentle creatures of Thra, Deet fell foul to Skesis influence on the world.

After receiving the power of the Sanctuary Tree, Deet was given the power to move the Darkening infection into herself. The greatest risk of using this power was to herself, by absorbing too much of the Darkening it could corrupt her.

This ultimately came to pass when the Emporer tried to use his Darkening power on the Gelflings. Deet stopped the Emporer by absorbing the Darkening, but in the end, this corrupts Deet and she is overcome by the Darkening’s contagion. 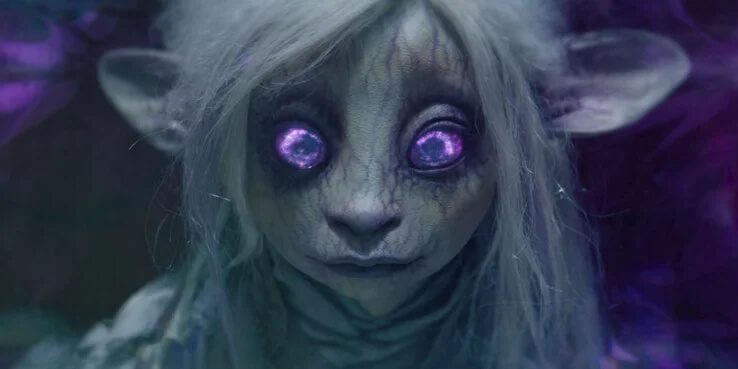 Deets vision of a fully corrupted version of herself

In Deet’s vision, she was sat upon some form of throne. As the darkening continues to consume her, she may seek out power for herself.

What about the rest of Deet’s vision?

For those who have seen The Dark Crystal, won’t have been spoilt by Deet’s vision.

But what she saw potentially went beyond the events of the series.

The mother running away from a Garthim with a babe in arms is likely the mother of Kira, one of the protagonists of The Dark Crystal.

The male Gelfling placing a piece into the dark crystal will have been Jen and not Rian. Jen is the other protagonist of The Dark Crystal.

Deet’s vision along with all the knowledge on the Skesis and Mystics, may pave the way for the creation of the Wall of Destiny.

Is Rian now the leader of the Gelflings?

No, and we don’t expect him to be either.

Rian may be the one to unite the Gelfling’s together but the All-Maudra is the one that rules them. While the Gelflings are at war with the Skesis, Rian will likely be the ‘general’ of the Gelfling army. He may have to take on the responsibility of leading the Stonewood clan until a Maudra is chosen.

Will Brea become the All-Maudra?

As the daughter of the previous All-Maudra, Brea is certainly the best candidate to lead the Gelflings. Despite this, Brea hasn’t shown signs of wanting to become the next All-Maudra.

Instead, there’s a chance that Seladon could be voted in as the All-Maudra. Despite the fact she sided with the Skesis, Seladon has now seen the truth and the error of her ways. Shown to be a capable leader that has an air of authority around her, Seladon could become a great All-Maudra.

Will the Skesis win the war?

Ultimately, for the events of The Dark Crystal to happen the Skesis have to win.

As sad as this will be, our protagonists will be the pioneers of the Skesis downfall.

What hasn’t been mentioned in the series yet is the Wall of Destiny. The wall showcases an ancient Gelfling prophecy, detailing the Great Division of the Skesis and Mystics and that to restore balance and save the world of Thra, a Gelfling must be the one to heal the Crystal.

To create the wall it took the power of seven members from each of the seven clans, 49 Gelflings in total. By lighting the fires of prophecy and taking counsel with the flames, they were able to wield magic thus creating the Wall of Destiny.

The Wall of Destiny

Prior to the series being announced as a Netflix Original, The Jim Henson Company struggled to get the series off the ground. Once the company was provided with the funds it needed by Netflix, the production of the series boomed.

We wouldn’t expect to see another season until of least 2021. It took a long time for the first season to be produced and for another ten episodes to be developed could take just as long. From the day The Dark Crystal: Age of Resistance was announced as an Original, to the release date took 27 months. It’s highly unlikely the second season would take as long but the best-case scenario, we’ll see the next season in 2021.

Other The Dark Crystal Netflix News

Here we’ll take you through any additional news that has come out of Dark Crystal since its debut on Netflix.

We're ready to announce a release date for The Dark Crystal: Age of Resistance Tactics, and we're as excited as the fizzgigs are! Get ready to join the resistance on February 4, 2020! Learn more at https://t.co/OgCsD3OEGh #darkcrystaltactics pic.twitter.com/jR0zM6LiJ7

Would you like to see another season of The Dark Crystal: Age of Resistance? Let us know in the comments below.