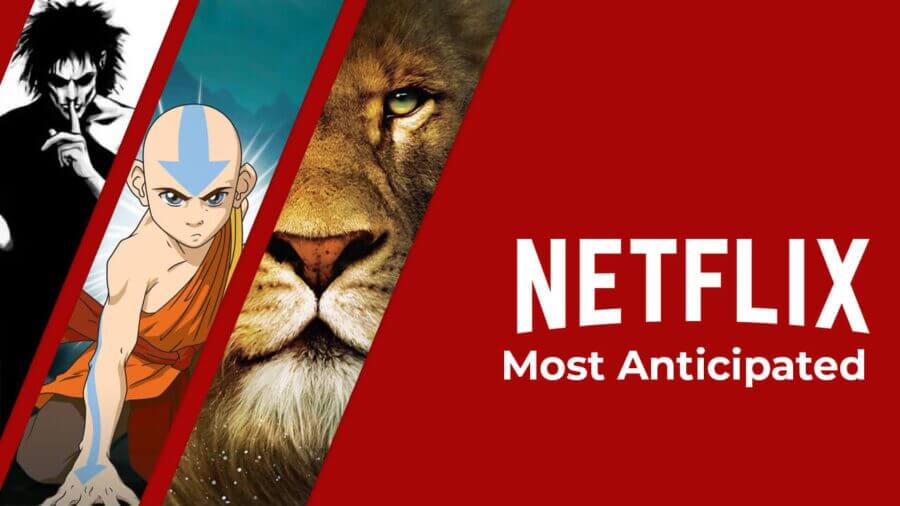 With HBO Max now out in the wild, you may be wondering what Netflix has in store next. While we’re working on huge previews of everything coming to Netflix in 2020, 2021, and beyond, we thought we’d pick out our favorite upcoming titles.

Each of the core team here at What’s on Netflix has picked our most anticipated series, movies or franchises in some places. There’s nine in total but of course, this is just a fraction of what Netflix does actually have coming out soon.

We begin with Avatar: The Last Airbender that has the potential to be Netflix’s biggest show behind the likes of Stranger Things.

The live-action reboot of the Nickelodeon series has been in development for some time and should be gracing our screens either towards the end of 2021 or later.

The original creators being on board gives us high hopes for the projects unlike some of the other adaptations Netflix has done that have fallen relatively flat on their faces.

The animated series just recently dropped on Netflix and instantly rose to the top of the Netflix charts.

That’s right, Netflix has access to the entire library of Narnia books and they’ll be adapting in various forms over the coming years.

It’s a massive undertaking with Disney having a fair crack at it over the last couple of decades.

An architect is in place for the universe and we’re already hearing snippets about what we can expect. Either way, we can’t wait for a whole new generation to be introduced to Narnia.

With each major streaming service having a superhero universe on it Netflix is following suit. Disney+ has Marvel and HBO Max has some access to the DC universe and Netflix has Millarworld (and others too!).

Mark Millar is a comic book veteran who’s worked in the Marvel universe but is also known for Kingsman and Kickass.

Netflix has extensive access to his entire catalog and has teased how there’ll be plenty of crossovers.

The first title set to release as part of the Millarworld universe is Jupiter’s Legacy which is due to release later in 2020.

One of the largest card and most played card games in the world, there’s a huge amount of lore and history behind the colourful characters of Magic the Gathering. The potential to explore the vast worlds of MTG is an exciting prospect and with the series set to focus on one of the most popular Planeswalkers of the franchise, Chandra Nalaar, fans have every right to be excited. The directors of Avengers: Endgame, the Russo Brothers, will be working on the anime series, and as fans of the card game itself, you can bet they’ll make an incredible series.

One of the most anticipated Originals amongst subscribers, myself included, we’ve been waiting eagerly for any news related to The Sandman, and it’s eventual arrival on Netflix. The series, based on the comic-book characters created by Neil Gaiman, is expected to be one of the most mind-blowing, and thought-provoking Originals we’ve seen yet.

We’re still waiting on a cast list, but if The Sandman has even half of the cast featured in the audiobook reading of the comic series, then the hype train is firmly ready to be boarded.

Held prisoner for several decades, Dream, the manifestation of dreams, escapes from the mortal wizard that kept him prisoner. Upon returning to his real, Dream finds his world in a state of disrepair and seeks to fix the damage caused by his long absence.

Extremely torn between choosing Vikings: Valhalla and Resident Evil, in the end, I decided to go for the latter.

Despite my better judgment, I genuinely do believe that the Resident Evil series has a major amount of potential to be one of the best Originals that Netflix can offer. There’s a lot that Constantine, the production studio, can get wrong, exhibit A being the movies, but there’s also plenty they can do to make sure it’s done right.

Survival horror, gore, and staying loyal to the source material is the perfect recipe for success and to have fans flocking to Netflix to watch the series.

Unlike a lot of upcoming Netflix material, we actually have a release date for this one – and it’s soon!

Season 15 of Unsolved Mysteries is coming to Netflix on July 1 2020. This Original is a reboot of the classic TV show that ran from 1987-2008. The series attempts to piece together various unsolved mysteries: whether that’s a missing person, paranormal event, or cryptid sighting.

Stranger Things exec producer Shawn Levy and his production company, 21 Laps Entertainment, has joined the team for this reboot. Unlike the classic series, season 15 promises to be “pure documentary style”, with no cheesy host or narrator.

Netflix is bringing this modern classic to our screens for the first time ever. But perhaps there’s a good reason we’ve never had an adaptation before?

One Hundred Years of Solitude is a sweeping magic-realist novel by Colombian author, Gabriel García Márquez. Following the Buendia family over a century, the plot is notoriously fiddly, featuring dozens of characters and fantastical events. Until now, García Márquez and his family refused to sell the rights for an adaptation. They believed no movie could do the intricacies of the plot justice and were especially disgusted by any suggestion of an English-language adaptation. However, Netflix must have said something right. The family have agreed to a Spanish-language limited series adaptation, with Gabriel García Márquez’s sons serving as executive producers.

While many literary fans are (understandably) skeptical, we think this will be a very popular series.

Another exciting Original that’ll (hopefully) be gracing our screens later this year. Bridgerton is the first Original to come out of Netflix’s exclusive output deal with Shonda Rhimes. The show is based on a series of bestselling romance novels by Julia Quinn.

The show follows the eight Bridgerton siblings as they galavant through the high-society world of Regency England: like a Jane Austen novel, but sexier. Of course, this will be much less white than your usual period piece. Shonda Rhimes is well-known for her inclusive casting. We’re really excited to see how Shondaland turns the historical drama on its head.

Are you looking forward to any of our picks? Let us know in the comments.