‘First Kill’ Canceled at Netflix; Won’t Be Returning for Season 2

First Kill won't be coming back for a second kill. One of the big new premieres of 2022 for Netflix is First Kill, a new teen drama series that sees a vampire fall in love with a vampire hunter. First Kill definitely sets up a second season, but won’t be returning for a season 2 and has been canceled after the first season.

Arriving on June 3rd, 2022, the new series from V.E. Schwab sees Juliette and Calliope falling in love, much to the disappointment and surprise of everyone around them.

Among the cast for the series included Imani Lewis as Calliope Burns, Sarah Catherine Hook as Juliette Fairmont, Elizabeth Mitchell as Margot Fairmont, and Gracie Dzienny as Elinor Fairmont.

The reviews for the series divided critics and audiences. On RottenTomatoes, the show holds a 52% with critics but 93% so far with audiences. Over on IMDb, the series is clocking in with a 6.2. It’s worth noting that the show has garnered a big and vocal following on social media.

Variety’s Caroline Framke was perhaps harshest on the series, saying:

“For all the work First Kill puts into making sure it hits all the right notes, the series feels more like an uncanny valley version of what it’s attempting to be rather than a worthwhile story all its own.”

Has Netflix renewed First Kill for a season 2?

On August 2nd, Deadline announced that the show would not return for a second season, citing performance issues (more on this in a second).

“According to sources, the series, which did not have the staying power of most Netflix hits, still did not meet thresholds for viewing and completion of episodes.”

The creator of the show took to Instagram to address the cancelation, saying:

“The day I found out my first tv project was being picked up for an entire season, was one of the best days of my life. But that doesn’t mean this—the day it got cancelled—is the worst. Because the lack of a second season doesn’t erase the first. It happened, I got to see a great group of writers spin the thread, got to see an amazingly talented group of actors bring my characters to life. I know first hand, that stories never expire, that they wait for new readers, new viewers, to find them, and I’m so glad that First Kill will be there, for those who go looking.

I’m proud of the cast and crew for bringing this to life with a wealth of talent and a mountain of heart, and grateful to the millions and millions of viewers who watched and championed and loved the show. Thank you.”

In addition, Imani Lewis shared a photo alongside Sarah Catherine with the caption: “Forever your Calliette”.

Ultimately, the cancelation came down on the series’s performance and, particularly, how well it performed in weeks 2, 3, and 4. Things don’t look particularly promising. 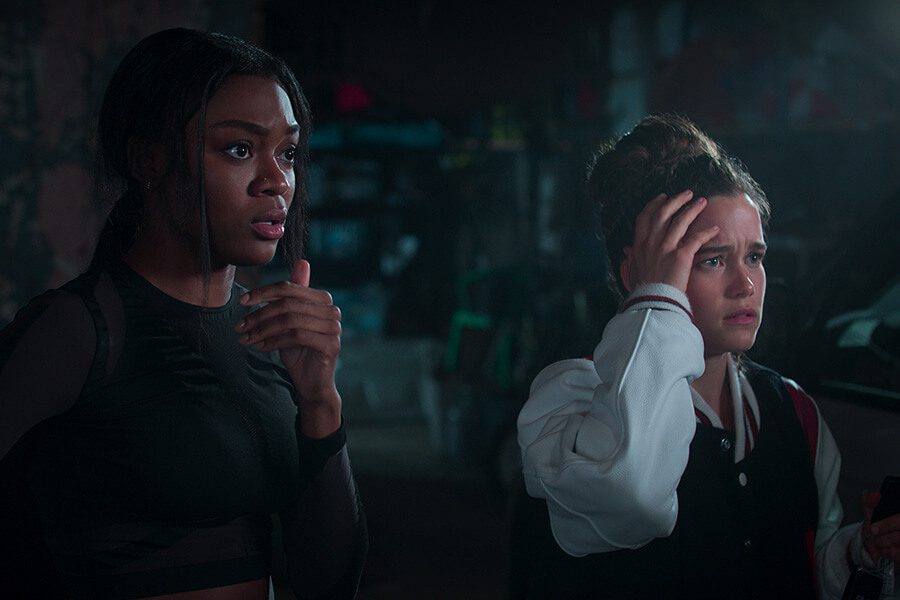 How well did First Kill perform on Netflix?

In its first three days on Netflix globally, the show picked up 30.34 million hours placing it number 7 for that week. It was up against stiff competition in that first week competing with Surviving Summer (also hoping to get a second season) and Stranger Things dominating both headlines and viewership.

In week 2, the show scored 48.77 million hours viewed, representing a 61% increase in viewership but that came crashing down in week 3 when the show saw a 62% drop in viewing hours.

It didn’t feature for a fourth week, meaning it was watched for less than 15.02 million hours that week.

We can compare First Kill’s first three-day debut to other shows to see how it stacks up. If we compare against Heartstopper (which dropped with episodes with lower runtime, it’s worth noting), that show only managed 14.55 million views.

Digital I, a British-based SVOD data company, has provided exclusive data on the show’s completion percentages. Their data reveals that of everyone that started the show, just over 40% of people managed to finish it.

A representative for Digital I told us, “Historically, under 50% almost always leads to cancellation.”

Another comparison would be In From The Cold, another sci-fi/fantasy-esque show with a similar makeup. That achieved 24.72M hours in its first 3 days on the service. That show hasn’t been renewed for a season 2 yet, but it’s worth noting that it saw a 64% drop in viewership from weeks 2 to 3.

Data from Parrot Analytics (published via TheWrap) suggests the show’s interest in week 2 shot up 90% and placed the series just behind Ms. Marvel and ahead of Gaslit in terms of demand. 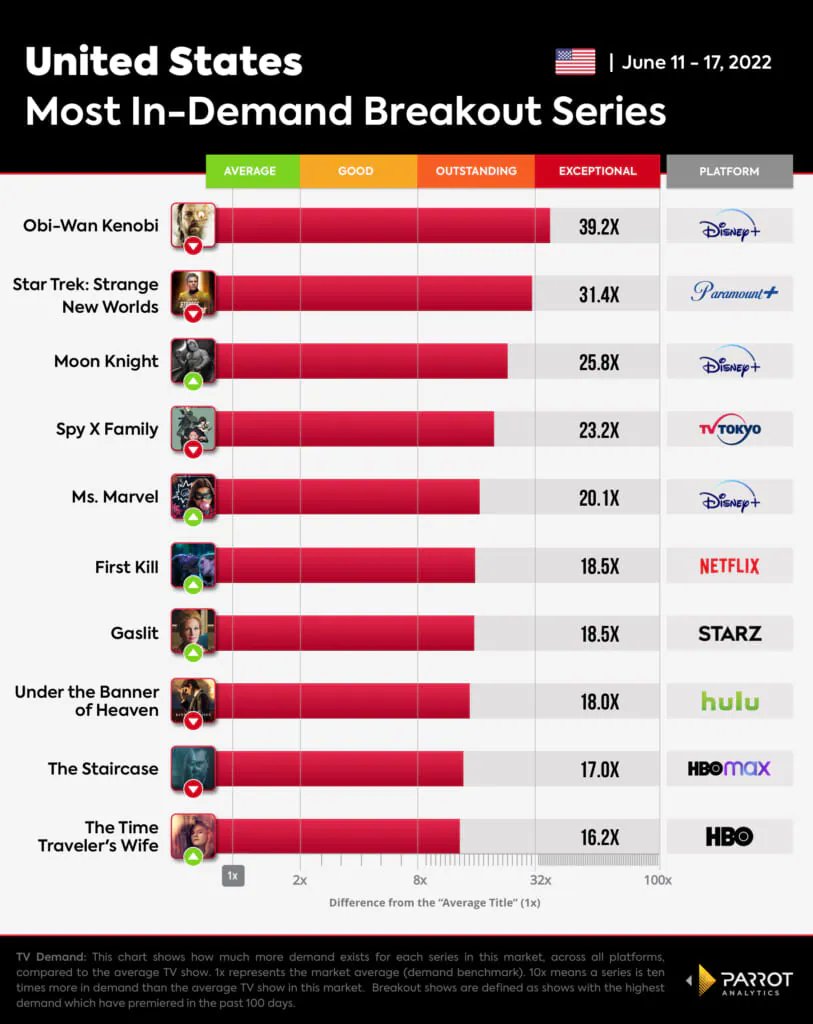 We can also look at raw top 10 data from FlixPatrol who collects the daily top 10s from around the world and applies points to the show depending on its position. They note that the show is still growing in popularity and as of June 15th was the third most popular title on Netflix globally behind Stranger Things and Peaky Blinders.

The global map below shows you where the show is performed best which was mostly in Eastern Europe. On the left side of the picture below, you can see the total number of points the show gathered in the top 10s and a steep decline after a couple of weeks.

Google Trends can also provide us with some insight into how well the series stacks up in terms of demand in searches. We’ve compared the show against some other debut shows in 2022 including In From The Cold, Heartstopper and Vikings: Valhalla.

As you can see, the show has made a modest start and has surpassed In From The Cold but is likely going to come in under the demand of Vikings: Valhalla (renewed through to season 3) and far short of Heartstopper (which was renewed for two additional seasons).

Google Trends chart for First Kill vs In From The Cold, Heartstopper, and Vikings: Valhalla

What we expected from season 2 of First Kill on Netflix

A quick recap of the season 1 finale before we dive into where we’re headed next.

Here’s a reminder of what happened in the final episode:

“Blood flows and betrayal burns after a shocking turn of events leaves devastation in its wake – and tests the bonds of love between Cal and Juliette.”

That ultimately leads to a big bust-up with the relationship seemingly dead between Juliette and Calliope, with Cal vowing to kill Juliette and all legacies like her one day.

One of the big story threads going into a second season would be Theo, who is now becoming a vampire, and his journey into that world and coming to terms with his new reality.

As DigitalSpy notes, Elinor is in a spot of bother for a second season by saying:

“Elinor’s part in the whole Theo-vamp debacle has inadvertently landed her in police custody. Without her parent’s help to save her, how will she escape jail? We smell multiple murders on the horizon.”

Before we go, we should note that Victoria “V.E.” Schwab, the creator and writer of the Netflix show and its source material, posted on Instagram that she’s diving back into the world of Shades of Magic. She’s working on the next entry in the novel series a week before the cancelation was made official perhaps that was the earliest sign that the series wouldn’t be returning.

Would you have liked to see First Kill return for a second season on Netflix? Let us know in the comments down below.