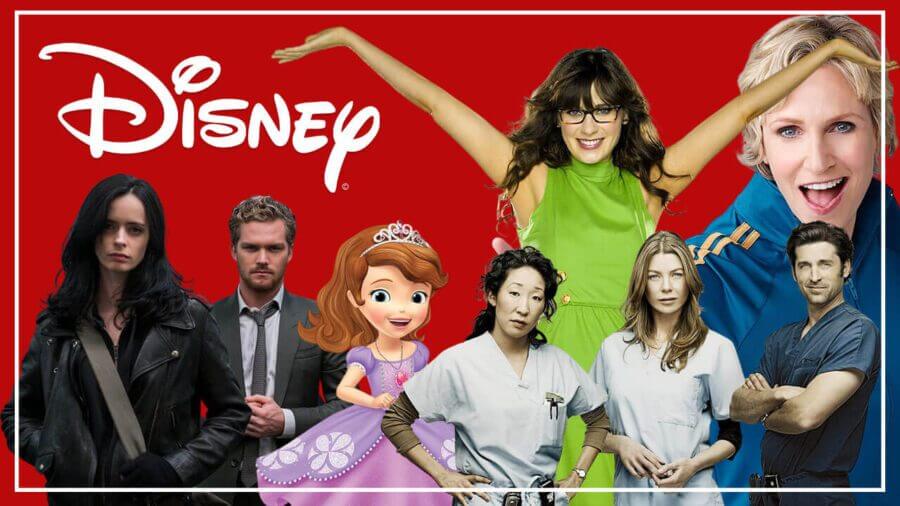 We welcome Drew Ryan who is an avid follower of Disney+’s library who will be taking you through all of the remaining Disney titles currently on Netflix US and when we can expect them to be removed.

Editor’s note: This article includes mostly speculation. Removal dates are subject to contracts and to change. This list only applies to the United States of America and other regions will vary.

With the recent news that Liv & Maddie is leaving American Netflix on April 23rd, Disney’s presence continues to dwindle as they pull their content for exclusive streaming on Disney+. The purpose of this article will be to list all the content remaining on Netflix that is distributed by Walt Disney Company along with estimated removal dates.

Most of the remaining Disney titles licensed to Netflix are under legacy contracts and their estimated date of removal can be guessed with decent accuracy.

If you search “Disney” on Netflix it returns 30 results. However, there are more than 30 titles still on the service. Additionally, 10 of the titles listed as “Disney” are not Disney owned and thus irrelevant to this  article. I will mention those at the end.

Without further ado, here are the remaining titles organized by category.

ABC-produced shows tend to leave 2 years after the addition of the final season as exhibited by Scandal in May 2020 and Once Upon a Time in September 2020. However, some leave 4 years after the final season such as Galavant in September 2020 and the now-confirmed to be leaving May 31 – American Crime. Since Private Practice was previously removed in June 2017, we can predict its return in December 2019 was on 2-year special contract.

It’s also worth noting Shonda Rhimes has an output deal with Netflix and therefore just like some of the FOX shows we’ll come onto separately in a second, may have other external factors at play.

Back in 2019, Switched at Birth left Netflix 2 years after its final season was added. Since Young & Hungry is beyond that point the next logical removal date is 4 years after which would have it leaving this June.

Fox’s television series contracts are complicated and difficult to predict due to unique circumstances.  For example, 3 of the shows listed above are branded as Netflix Originals. Arrested Development seasons 4 and 5 were produced by Netflix, but Fox retains distribution rights to seasons 1-3 which are also streaming on Hulu. Internationally, Disney+ Star features the first 3 seasons. It is believed Netflix’s distribution rights to Arrested Development are not in perpetuity and will expire at some point. Usually, these sorts of deals last 4-10 years after the final season.

There is precedent to a Fox-produced Netflix Original leaving Netflix, and it involves 2011 – 2014’s The Killing. Netflix saved the series after it was canceled and produced the 4th season. Four years later, all 4 seasons left Netflix and are now streaming on Hulu. While we can’t be certain the same will happen for Arrested Development if it does follow that trend, it will leave Netflix 4 years after its final season which would place it as a 2023 removal.

Due to Ryan Murphy’s pact with Netflix, predicting the removal dates for his 3 series listed above are difficult because of his involvement and likely influence on where they continue to stream.

Glee is already approaching its 5th year of streaming since its final season released and could just as easily leave this July after 5 years or July 2023 after 7.

In the case of The Politician and Ratched, both are branded as Netflix Originals which makes the removal more of a question of if rather than when.

Like with Glee earlier, Ryan Murphy’s contract with Netflix makes it impossible to predict the removal date for his FX series. American Horror Story appears to be licensed on a season-to-season basis. Twice over the past few years, individual seasons began to expire and last year one even left, only to have returned about a week later along with the addition of the most recent season. The full series is also available on Hulu so Disney appears in no rush to convert it to an exclusive. Or we come back to Murphy’s Netflix pact having some role in keeping the shows available as we mentioned above.

Further complicating this situation is that American Crime Story’s 1st and 2nd seasons are listed as separate titles on Netflix. The first season, The People vs OJ Simpson has already been streaming for over 4 years.

Liv and Maddie will leave Netflix on April 23, 2021. That’s 4 years after the final season was added. Goldie & Bear left 2 years after the final season November 2020. Keeping that in mind, Sofia the First looks to be a 4-year  contract as it has passed the 2-year mark. Once it is canceled, Bunk’d will likely stream for 4 years after its final season is added as well. Since this currently airing 5th season is the first live-action Disney Channel show in history to hit 5 seasons, the writing is on the wall… tick tock.

* means the film is already streaming on Disney+

Most Disney films under these legacy contracts appear to stream for 2 years such as Bolt (removed July 2020) and Saving Mr. Banks (removed March 2021). As such, I believe the Muppets films and Princess and the Frog will follow that pattern. Miracle is an exception, now confirmed to be leaving May 31st after 3 years.

Tinker Bell leaves May 17th. Disney’s Direct-to-Video films appear to be just shy of 6-year contracts. This was seen with all previous DTV removals including 2020’s removal of Iron Man & Hulk: Heroes United, Iron Man & Captain America: Heroes United, and The Pirate Fairy in addition to 2019’s removal of Mickey’s House of Villains and Snowed In at the House Of Mouse. The 3 DisneyNature films still streaming are also DTV releases.

The Walt Disney Animation Studios Short Film Collection presence on Netflix is why the shorts contained within are streaming on Disney+ in every country except America. After its 6-year contract ends in October, classic shorts like Tangled Ever After, Frozen Fever, and Prep & Landing: Operation Secret Santa will move to Disney+.

The BFG, The Help, Real Steel, and War Horse are part of Disney’s 14-film distribution deal with Dreamworks. As a result, these films are co-productions and follow a different path than most Disney films. Eventually, they will complete their pre-existing contracts and settle onto Disney+ as they are in some international countries. Some Dreamworks/Disney collabs have streamed for 2 years such as The Hundred-Foot Journey which left January 2021 and War Horse, which is leaving May 3rd, 2021, while others, like The Help, now confirmed to be leaving May 31st, 2021, stream only 1 year.

Tini appears to be under Disney’s 6-year DTV contract. The 5 Disney India films are unknown but are expected to be on similar timelines.

What about Marvel’s The Defenders leaving Netflix?

There is a belief that Netflix’s distribution rights to these Marvel shows is only temporary. This is because of a statement made by Disney’s then-CEO Bob Iger back in 2013 to Bloomberg. “ This gives us an opportunity to  create and own four new series that Netflix will have exclusivity [on] for a period of time, starting in 2016, when the series are made available to them .“

As mentioned before, some of Netflix’s earlier originals were on similar contracts and have already left. It seems unlikely that Disney, as notorious as it is for copyright control and keeping power over its creations would allow Netflix permanent access to shows they produced. They likely leave 4-10 years after their final season. However, Bob’s use of the word “exclusivity” could also mean Netflix has the option to keep them streaming on Netflix even if they go to Hulu as well.

Two films that aired as Disney Channel Original Movies are actually produced and distributed by MarVista. Those titles are Radio Rebel and Zapped. While MarVista and Disney worked out a deal to get Zapped on Disney+, no such deal has been made for Radio Rebel. Whether it someday streams on  Disney+ is anybody’s guess. Their expirations are also impossible to predict as Zapped has already been streaming for a whopping 7 years. Meanwhile, Radio Rebel has been added, removed, and is currently streaming on Prime Video and Peacock at the same time as Netflix. Why can’t Disney+ get their hands on their “90th DCOM” but numerous other services have it? Nobody knows! Well, someone at Disney and MarVista’s licensing departments knows, but they aren’t telling!

The Lego Marvel films remain a mystery. Maximum Overdrive was added in September 2014, removed in November 2016, and then re-added in January 2017. With all 4 films being added relatively recently, it suggests Lego is calling the shots. Sorry, Disney+ subscribers. These films are not going anywhere anytime soon.

The remaining Lego Marvel titles on Netflix include:

Netflix also houses the series Miraculous Ladybug, PJ Masks, and Giganotosaurus. The latter 2 are already on Disney+. Miraculous Ladybug will head there once it leaves Netflix. These are not Disney-owned titles but Disney has obtained temporary licenses for them. Predicting when they will leave Netflix is impossible as I have no knowledge of these sorts of contracts, though I suspect they will all leave in the next 2  years.

Another show that aired on Disney Channel is Hotel Transylvania. This show is owned and distributed by Sony and its removal from Netflix is unrelated to Disney as it will never stream on Disney+ and was actually removed from DisneyNow (Disney’s VOD streaming service) on April 1st. UPDATE: April 21st, 2021 – due to the new Sony / Disney library deal the show’s streaming future is surprisingly less clear.

Finally, the shows Octonauts, Oddbods, Ghost Patrol, Fangbone!, Atomic Puppet, and P. King Duckling (the last two are currently listed to be removed in May 2021),  show up under the “Disney” search term, but Disney has no ownership or distribution rights to them. They aired on Disney XD or Disney Junior in some international countries as well as America in years past but are no longer associated with Disney and should be removed from the search results and replaced with more relevant title from the preceding list

Drew Ryan is a writer and film, TV, and Disney geek. He has degrees in English and Library & Information Science from Lawrence University, Concordia University-Wisconsin, and the University of Wisconsin Milwaukee. Interested in the minutia and licensing of streaming service content, he is always publishing lists, suggestions, and advocating for Disney’s missing library to be added to Disney+. You can find him waxing nostalgic over classic Disney Channel or geeking out over Marvel, CW shows, Netflix, & Disney @DrewviesMovies.