Disney, Marvel and Star Wars Titles Coming to Netflix in 2017 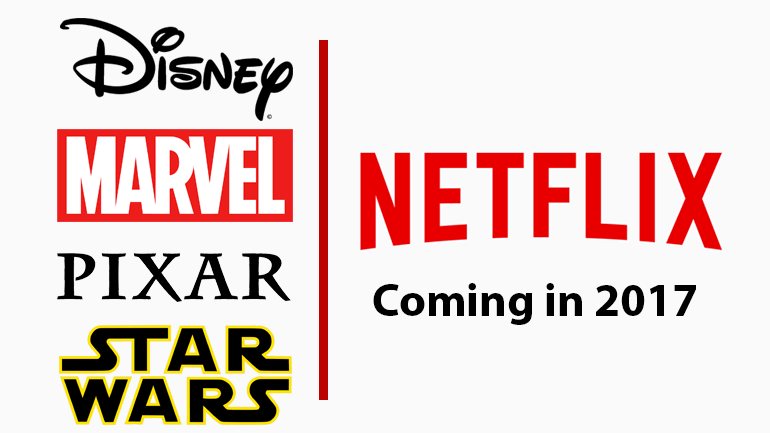 The Disney contract continues into 2017 bringing the biggest Disney, Marvel, Pixar and Star Wars content to Netflix soon after their theatrical release. In conjunction with our other big 2017 previews, we’re now going to go through the upcoming releases and give you a realistic release schedule of what to expect from Netflix in 2017.

To catch those up who are unaware of the Disney contract, the deal was struck in 2014 and began in September 2016. It detailed plans to bring the latest theatrical releases to Netflix soon after their DVD release and would cover the entire Disney new releases including Marvel and Star Wars titles.

Just before we cover what’s coming to Netflix from Disney in 2017, let’s quickly reflect on the Disney titles that are currently on Netflix from this contract. Here’s what’s come so far in order of release.

Moana is Disney’s big animation release of 2016, and early reports suggest it’s one of Disney’s best in recent years (second to Frozen of course). It features the voice talent of Dwayne Johnson, Auli’i Cravalho, Rachel House, Nicole Scherzinger and Alan Tudyk. It was Disney’s big bet of the year and indications are that it paid off with it grossing $179 million.

Beauty and the Beast (Live Action)

The last movie to fit in 2017 of the currently announced Disney movies for 2017 will be Beauty and the Beast with Cars 3 and Pirates of the Caribbean: Dead Man Tell No Tales being pushed back to 2018. The modern live-action adaptation of the animated classic will be starring Emma Watson as Belle and Dan Stevens as The Beast.

The fifth installment of the Pirates of the Caribbean franchise is due in the next month in cinemas and with it, we’ll see the return of Johnny Depp reprising his role as Captain Jack Sparrow. The movie is apparently a throwback to the first movie in the franchise which released 14 years ago! It may be a bit of a push to expect the latest Pirates to arrive before the end of the year but if it’s not in December it’ll be soon thereafter.

On the next page, we’ll cover the Marvel and Star Wars titles coming to Netflix in 2017.