After a month of big casting announcements and exciting reports from the set, things quietened down sharply, largely due to the coronavirus pandemic, which prompted Netflix to halt the production of The Witcher season 2 from the second half of the month onwards. Here’s the latest on The Witcher season 2 with an exclusive report from Redanian Intelligence.

Originally scheduled for a break of two weeks, filming has yet to resume, and the safety measures preventing that will likely remain in place for a time yet. However, there were some happenings, as the first two weeks of March saw the return of the witcher himself – Henry Cavill – filming alongside Freya Allan (Ciri). A number of other actors were busy too, including the newcomers who will portray Geralt of Rivia’s witcher colleagues.

On the casting front, Redanian Intelligence uncovered an audition tape for an iconic character from the Witcher books, offering a glimpse at what to expect from the politics in season 2. Finally, a few more actors joined the ever-expanding cast of The Witcher. Read about all the details here in our recap of The Witcher-related news for March 2020!

Topics in this months news roundup: Like so many other projects ongoing at Netflix, The Witcher shut down the production of its second season due to the coronavirus pandemic. The announcement on March 16th came days after newcomer Kristofer Hivju (Nivellen) shared on Instagram that he had tested positive for the disease and was self-isolating. Luckily, the former Game of Thrones star reported only having mild symptoms.

As an official spokesperson revealed, Netflix paused production of season 2 prior to becoming aware of that, but shut down all production offices and the main headquarters at Arborfield studios as a further precaution. Asked by The Hollywood Reporter, a source close to the production said:

Cast and crew health is our primary concern. We are dealing with an unprecedented global pandemic that is beyond our control, and in many instances with mandates or restrictions imposed by governments (including travel restrictions in many countries). As such, we have made the decision, effective immediately, to pause production for two weeks during this difficult time, and we will support our production partners working on Netflix U.K. scripted series in doing the same. This will allow everyone the time to make informed decisions about how to move forward. The coronavirus has raised challenging issues for everyone working on set on productions for Netflix. We are very grateful for all the work everyone has done to keep cast and crew safe during this pandemic.

While people are obviously worried that the break will negatively affect the release of season 2, a 2021 air date is still a safe bet. Of the five months of planned filming, one is already completed. If we take the first season as a reference, we can expect a period of six to seven months of post-production to follow. This means that for the release date to be pushed into 2022, the production would have to pause for almost a year until February or March 2021. In all likelihood, we will have to wait just a few more months for The Witcher to return to the screen.

As film and TV productions in many countries have been suspended one after another, actors may find themselves in a precarious position. The Witcher casting director Sophie Holland and her assistant Faye Timby have come up with an unconventional idea to use the time that has now become abundant productively and give actors a chance to show their talent in a face-to-face meeting via the WeAudition platform. Using the hashtag #CastingCrushesCorona, they devised a new project, spending an hour a day speaking to up to six actors from all over the world.

Holland, who was halfway through the casting of The Witcher season 2 when Netflix shut down production, spoke with Deadline about her initiative:

There’s been some really interesting actors that I didn’t know about before that I’m meeting now. I can definitely see that our paths will cross again in the future. I can already think of roles that might match with people I’ve spoken to. It’s also given me a sense that the industry still goes on.

Perhaps this could be a chance for some actors to get hold of one of the much sought-after roles in Holland’s biggest project to date. The Witcher showrunner Lauren Hissrich certainly seems to think so, as she joined the two casting professionals for one of their recent sessions of #CastingCrushesCorona. Two weeks before the shutdown, Redanian Intelligence reported that Henry Cavill finally made his return to the set, picking up his role as the titular witcher Geralt of Rivia. He was joined by Freya Allan, who plays Princess Ciri of Cintra, the child whose destiny is linked with Geralt’s through an ancient custom called the law of surprise.

When we last saw the pair, Geralt just found Ciri who had been on the run for weeks pursued by the agents of the Nilfgaardian Empire who invaded her homeland and slaughtered her family. From all we know of season 2, it will pick up things right where we left them, with Geralt and Ciri making their way north through the blazing heat of the battlefields of Sodden, where the Nilfgaardian army was stopped in its advance by a small force of Northern sorcerers, including the witcher’s love interest Yennefer (Anya Chalotra).

Filming took place between the end of February and the beginning of March at Bourne Wood in Surrey, where some locals previously spotted a large number of bodies and extras dressed in Nilfgaardian armor, further corroborating that the scenes filmed there will depict the aftermath of the Battle of Sodden. Henry Cavill took to Instagram to reveal the return of a special cast member for the occasion: the horse Zeus, flown in from his home in Hungary to resume his role as Geralt’s trusted steed Roach.

Filming: The witchers of Kaer Morhen start their season 2 journey 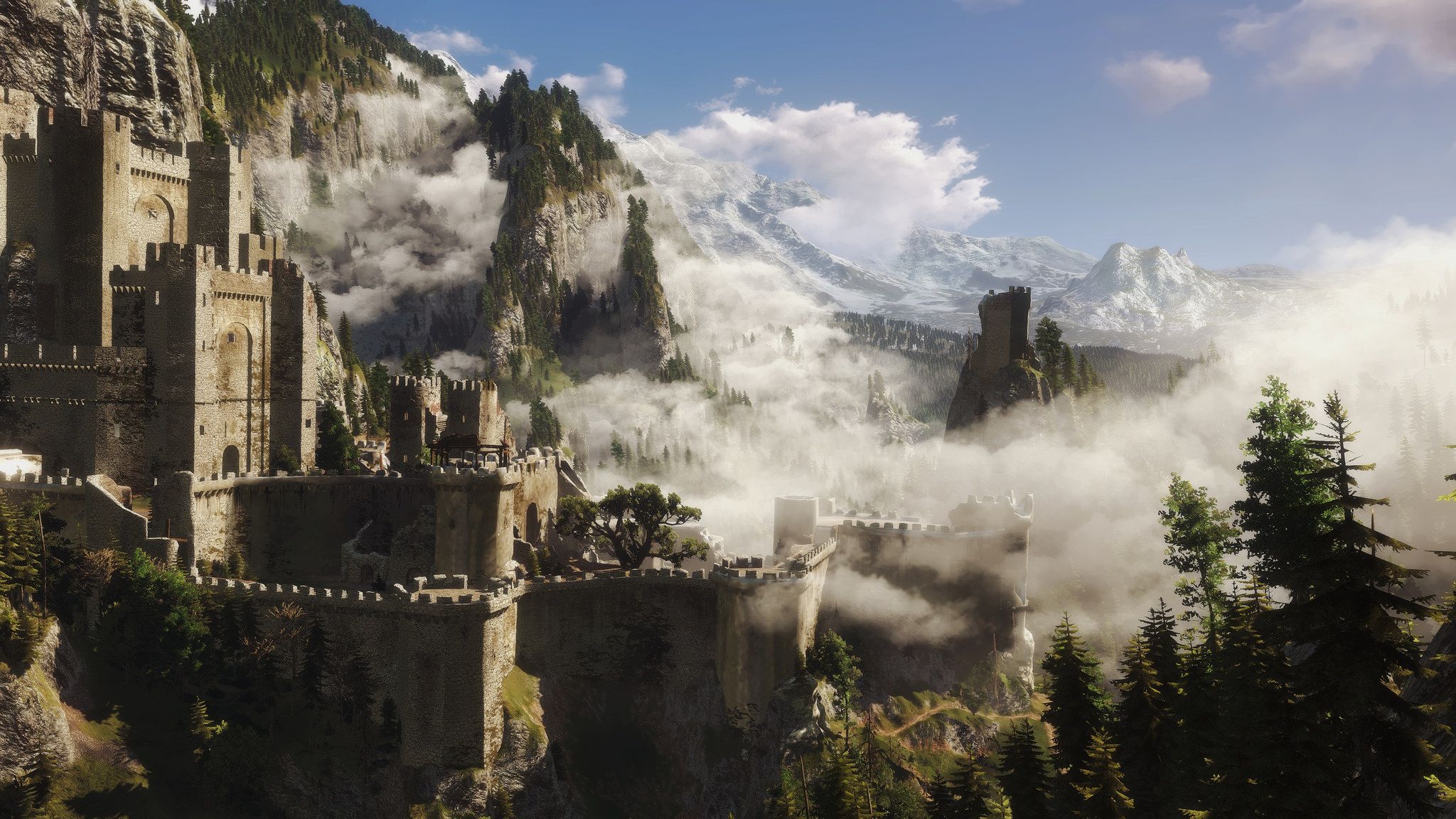 In February Netflix finally announced the main line-up of new actors to join The Witcher and judging by multiple social media posts some of them have already started filming.

In what is probably one of the most anticipated sequences of the second season, viewers will be introduced to Geralt’s few surviving Witcher colleagues at the ancient keep of Kaer Morhen. For those who have read the books or played the games, this will be a reunion with some of the most beloved characters of the franchise. For all others, we’ll briefly introduce these important figures without getting into spoiler material. Vesemir is played by Danish actor Kim Bodnia, best known for his roles in Killing Eve and The Bridge. He has already been mentioned by Geralt in the first season of The Witcher and careful listeners will have heard the voice of his younger self during a brief flashback scene in the final episode. He is the witcher who raised young Geralt after his mother Visenna (portrayed in the show by Frida Gustavsson) abandoned him as an infant.

Experienced in the ways of monster-slaying, Vesemir has become a strict but protective surrogate father and mentor to Geralt and other young recruits. While the world around him has changed, he is ever steadfast, vigorous and resourceful even in his advanced age and remains the undisputed authority at Kaer Morhen. Thue Ersted Rasmussen, another Dane, plays Geralt’s childhood friend Eskel. Known to both readers of the books and gamers, Eskel is calm and collected though no less deadly than Geralt in a fight. Due to his trademark disfiguring scar he appears menacing at first sight but proves to be good-natured and tactful as far as witchers go.

Back in January, Rassmussen visited prosthetic artist Barry Gower (known for his work on Game of Thrones) to receive a full body cast. As Redanian Intelligence speculates, this may be connected to his work on The Witcher, as Gower appears to have joined the second season. Paul Bullion, whom you may remember from his role in Peaky Blinders, plays Lambert, who like Vesemir and Eskel appeared in both the books and the games. Belonging to a younger generation of recruits than Geralt, this big warrior has a particularly sharp tongue and a confidence bordering on arrogance. Despite that, he is generally trustworthy and competent, especially in matters of swordsmanship.

Bullion has shared multiple videos displaying his new training routine and also appears to have become good friends with Rasmussen as the pair celebrated their first week on set in true witcher style with a couple of pints. Last but not least is Yasen Atour who plays Coën, a character who never appeared in the games but is held dear by many readers of the books.  Not originally from Vesemir’s School of the Wolf, Coën spends the winter at Kaer Morhen before returning to the path. He is young, easy-going and lethal in combat but also wise enough to know that many swordsmen who think of themselves as the best end up in graveyards.

Since Netflix announced some of the main new cast members in February, things have been relatively quiet, even though a number of key roles for the second season have not been revealed. One such role is the spymaster Sigismund Dijkstra who will appear in season 2 as shown by an audition tape surfacing earlier this year.

In March, Redanian Intelligence found another tape that shows actress Nina Yndis reading for the role of “Queen Mabel”, which can easily be deduced through her lines as a codename for Queen Meve of Lyria and Rivia. The video has since been removed by the actress but you can find the transcript below. As is common with audition tapes, the lines were likely written for the casting session only and will not appear as such in the show. It’s also likely that we won’t be seeing Yndis in the role, as audition tapes are usually uploaded by actors who didn’t get the part.

Unnamed man: I would offer apologies, but since it’s my purse paying to clean up your mess I’ll skip it!

Vinnie: We need an ally not a janitor. You need to mind your tone!

Meve: Sit down and quiet both of you. You can measure your pricks in your own time! I can assure you we have bigger things to discuss. Princess Serene is alive.

Meve: And worse yet. The South knows it! Their search parties are already days ahead of ours.

Vinnie: This is extortion! We won’t hear of it! I’ll have the king’s council…

Meve: Do shut up Vinnie! Name me a price. I want the girl dead by sunrise.

Meve is the only female among the Northern monarchs and although her kingdom is a relatively small one, she stands out among her peers due to her intelligence, sharp wit and no-nonsense approach to ruling. With Nilfgaard’s advance stopped at the Battle of Sodden but the threat far from gone, it seems clear that the Northern Kingdoms will take a more active role, debating how to find a common approach to deal with the southern menace.

While we are still waiting for names to connect to Meve, some of the smaller roles appear to be filling up slowly as two more actors joined the cast.

Stay tuned with Redanian Intelligence and What’s on Netflix for all updates on The Witcher.