Every ‘Friends’ Halloween and Thanksgiving Episode on Netflix in 2020 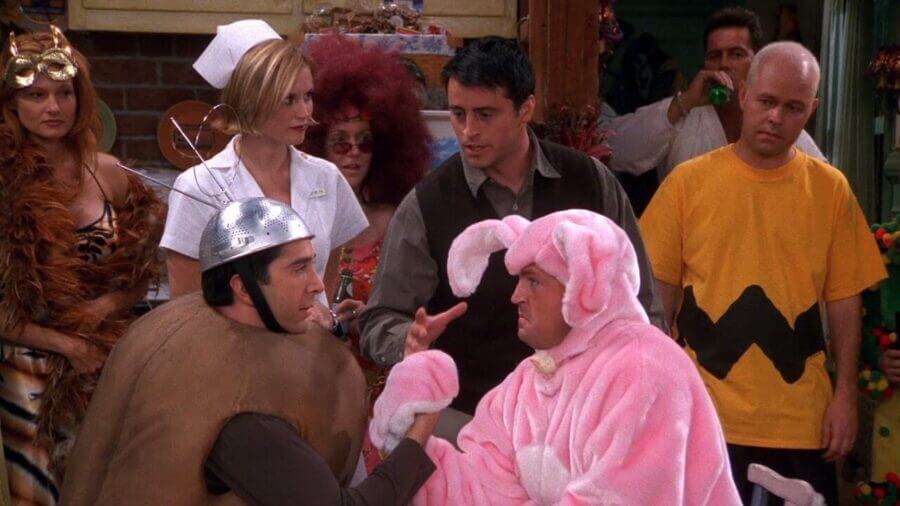 Although Friends is no longer on Netflix in the United States, those outside the US in most regions are still able to stream Friends on Netflix. Friends didn’t have all that many Halloween episodes but if you’re looking for the complete guide on how to watch them all on Netflix for Halloween 2020, here’s an updated list.

As we mentioned, those in the United States won’t be able to partake with this list, at least on Netflix anyway. The series, as you may know, has moved over to HBO Max.

We’ve also got Halloween watch guides for some of the other huge sitcoms on Netflix including The Office (last chance for those in the US on that series) and Community too.

Here’s the full list of Halloween and Thanksgiving episodes from Friends:

The One With the Halloween Party

Monica and Chandler host a costume party for Halloween. Phoebe runs into Ursula, only to discover her twin sister is getting married in a week, so to get invited, Pheobe invites Ursula to the costume party. When Ursula brings her fiancé, Eric, to the party, Pheobe soon develops a crush on him.

The One Where the Underdog Gets Away

The very first of ten Thanksgiving episodes, saw the gang take to the roof after the giant Underdog balloon escaped from the Macy’s Thanksgiving Day Parade. Disaster strikes when Rachel forgets the keys to the apartment, locking them out. Chandler also reveals why he doesn’t eat Thanksgiving food thanks to painful childhood memories of his dysfunctional family.

After their first kiss, Ross and Rachel reveal to the others what happened. Confused by the kiss, Ross can’t decide between Rachel and his girlfriend Julie. Joey and Chandler decide to help Ross by getting him to write a list of pros and cons between Rachel and Julie. But when Rachel finds the list, it all blows up in Ross’s face.

The One with the Football

When the gang head to Monica’s for Thanksgiving, the football game on the TV reignites the old sibling rivalry between Ross and Monica. Despite being told by their parents to never play the ‘Geller Cup’ ever again, they head outside for a ‘friendly’ game. The game is heated between Ross and Monica, while Pheobe and Rachel prove useless, meanwhile, Joey and Chandler are fighting over the attention of a very attractive Dutch girl.

The One with Chandler in a Box

With the five-year silent treatment, not enough punishment for Chandler, to earn Joey’s forgiveness for kissing Kathy, Chandler must stay in a locked box for six hours. Meanwhile, Monica is afraid to go to the Ophthalmologist after hurting her eye, afraid her ex-Richard will be there. But when Monica arrives, Richard’s handsome son Timothy is on call, and he just broke up with his girlfriend.

The One with All the Thanksgivings

Chandler continues his Thanksgiving tradition of being ‘king of misery’ by recalling the time his parents announced their divorce after Chandler’s father had slept with their housekeeper. The friends being to reminisce on some of their best and worst Thanksgivings over the years, including the time Chandler called a younger Monica fat, and when Monica dropped a knife on Chandler’s toe.

The One Where Ross Got High

Joining them for Thanksgiving, Jack, and Judy don’t know Chandler has moved in with Monica, and still don’t even know that the pair are dating. Knowing they dislike him, Chandler turns on the charm so he can tell them he is dating Monica. Ross is finally forced to reveal why his parents dislike Chandler. Meanwhile, Rachel tries her hand at making a dessert but accidentally makes it using two separate recipes, forcing the gang to pretend her monstrosity is delicious.

Ross, trying to show his intelligence, makes a fool of himself as he struggles to name all 50 states in a game. Joey almost ruins Rachel’s chance with her crush and fellow employee Tag. As for Chandler, he comes face to face with his fears when Pheobe sneaks a dog into the apartment.

The One with the Rumor

Will, an old school friend of Ross’ is invited to Thanksgiving dinner by Monica. Now handsome and thin, Will used to be really fat in high school and hates Rachel for being horrible to him in school. Will reveals, that he was apart of an I-hate-Rachel-Greene-Club, it’s members, him and Ross! Rachel discovers that Ross and Will spread a rumor about her, making her realize why certain guys wouldn’t date her. Rachel gets her own back when she reveals she was the culprit behind a rumor about Ross…

The One with Rachel’s Other Sister

On Thanksgiving Day, Rachel’s other sister, Amy, turns up to spend time with her sister. Materialistic and incredibly insensitive, Amy winds up all the gang causing chaos at dinner. Monica decides its time to finally use her ‘good China’ that results in disastrous consequences.

The One with the Late Thanksgiving

Tired of being the one to make Thanksgiving Dinner, Monica, reluctantly accepts to cook to please Pheobe. With only Chandler to help her, Monica gets super angry with the gang when they all arrive an hour late, locking them out of the apartment.

If you love Friends make sure to check out other series like Friends on Netflix. What is your favorite Friends episode? Let us know in the comments below!